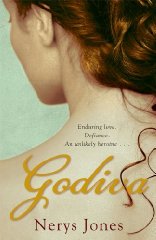 Product Description: The setting is Britain, 1045. The Normans are circling, waiting their turn to pounce on the English throne and wrest it away from the Anglo-Saxon barons who grudgingly support King Edward the Confessor, the childless, half Norman Virgin King. The royal court is a hotbed of rumor and political intrigue, and everything hinges on the succession. Godiva, wife of Lovric, Earl of Mercia, one of the most powerful barons-and herself a major landowner in her own right-is drawn into the court machinations. When Edward manipulates their son into a treasonable act and makes him a pawn in his power play, Godiva's ferocious maternal instincts rise to the fore. As the courtly scheming undermines Godiva's hitherto solid marriage and drives her to despair and confusion, the stage is set for a story so powerful its impact has survived for a thousand years. This story of an independent, resourceful, and intelligent noble woman tested to the limits of her endurance illuminates one of the great myths of British history.