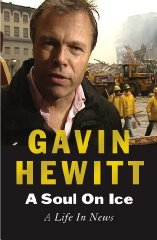 A Soul on Ice: A Life in News

Product Description: From the Berlin Wall to September 11th, Gavin Hewittformer CBC correspondent and current Special Correspondent for the BBC Ten OClock Newshas been involved in every major international story of the past 20 years. Once told by author Graham Greene that a foreign correspondent must freeze his conscience, put his 'soul on ice,' this absorbing autobiography shares Hewitt's journey to become emotional immune in the face of life-threatening crises. It also describes how television news is made and what happens behind the camera. In his career Hewitt rubbed shoulders with world leaders, royalty, rock stars, and the mafia and found himself arrested, accused of spying, and in an army boot camp. Gavin Hewitt reveals the truth behind the glare of the camera; he tells the stories he could tell friends, but could never broadcast. About the Author Gavin Hewitt is a special correspondent for the BBC's Ten O'Clock News. In the past 25 years he has covered most of the major world stories, including the September 11 terror attacks, the Bali bombing, the Soham murders, the Potters Bar rail crash, and the foot-and-mouth outbreak. He has worked for the BBC's Panorama and has been a correspondent with the Canadian Broadcasting Corporation in Toronto. Recently he presented BBC 2's Crisis Command.

Title: A Soul on Ice: A Life in News

Keywords: Hewitt, Gavin Biographies & Memoirs A Soul on Ice: A Life in News,

A Soul on Ice: A Life in News