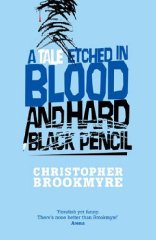 A Tale Etched in Blood and Hard Black Pencil

Review: Of all writers practising what might loosely be called crime fiction today, Christopher Brookmyre is the one who lends himself least easily to categorisation. There are those eccentric titles, for a start: such as the latest one: A Tale Etched in Blood and Hard Black Pencil. This unwieldy title (as often before) gives an indication of the sardonic quality of his writing, and in that, Brookmyre is reminiscent of his great American colleague, Carl Hiaasen. Like Hiaasen, too, Brookmyre favours eccentric and outrageous plots, but there is always a strong grounding in reality, which gives the humour a decidedly bitter edge. n nInternet contact between ex-school friends these days leads to some disturbing encounters, and Brookmyre's version of the scenario is typically murderous. Brookmyre is interested in whether or not the index to future of violent behaviour might be discerned in the school playground. DS Karen Gillespie is bemused by a cack-handed attempt at burning a pair of bodies; this takes place outside Glasgow (in fact, in the area in which she grew up). And in a nearby lodge, strange attempts have been made to clean up what appears to be the same crime, but (as a pathologist points out), everything here is handled as maladroitly as the murder. Two suspects appear, but when Karen discovers that they were at primary school together (along with one of the murder victims), things begin to look like a grisly version of Friends Reunited. n nBrookmyre readers will know exactly what to expect from this scenario, and they won't be disappointed. If the level of invention is not as delirious as in previous books, Karen Gillespie is as quirkily characterised as ever.

Title: A Tale Etched in Blood and Hard Black Pencil

A Tale Etched in Blood and Hard Black Pencil