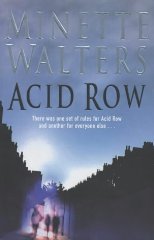 Mint condition.Macmillan,2001.First edition-first printing(1 3 5 7 9 8 6 4 2).Black hardback(silver lettering to the spine) with Dj(two small creases,nicks and scratch on the Dj cover),both in mint condition.Illustrated with b/w drawings.The book is new with light shelf wear on the outer edge of the pages,small pencil mark impression on the edge of the first blank page of the book.Price un-clipped.344pp.First edition.

Review: From the first page, Minette Walters assaults your sensibilities with her psychological thriller Acid Row; she grabs you hard and fast, sustains the onslaught throughout and hits you with a knock-out final blow. Straightaway she informs you that the abduction of 10-year-old Amy and the revelation that a paedophile has been relocated to Acid Row, a place of deprivation where literacy was poor, drugs endemic and fights commonplace, and where children were left to run wild, leads to rioting and five hours of savagery leaves three dead. n nEven with this prior knowledge, Walters' skill as a novelist never leaves you complacent and nothing prepares you for the horror and tragedy of her novel's shocking denouement. Monsters and heroes are found in the most unlikely places, subverting all your preconceptions: third-time pregnant teenager Melanie incites the protest only to block the rioters when they turn violent; Big, black Jimmy James is just out of prison but risks his neck to save the life of an injured policewoman; and the 71-year-old asthmatic father of the so-called paedophile turns out to be more sadistic than your worst imaginings. n nA page-turning novel doesn't have to be particularly well written or intelligent to hold you in its grip but occasionally one comes along with both qualities and leaves you reeling in its wake. This is it. Acid Row's numerous narratives are so tightly packed and interconnected that no detail is spurious and everything is channelled towards suspense and shattering revelations. Walters just goes from strength to strength. --Nicola Perry n nReview nBack on form with a vengeance, this is another taut thriller from English crime queen, Minette Walters. A chance remark made in Acid Row, a run down council estate, is the nemesis for scenes of horrific violence as a peaceful protest march spirals out of control into full-scale war. GP Sophie Morrison is trapped inside a known paedophile's house with two men. Held hostage by one of them, she attempts to get word to the outside of her plight unknowing of the fact that the police are unable to assist due to all entrances to the estate being blocked by overturned and burning cars. Jimmy James, freshly released from prison, tries to avoid the trouble but is slowly but irrevocably drawn into it against his will. Melanie and her mother Gaynor, instigators of the protest, gradually come to terms with the terror of what they appear to have unleashed and DCI Tyler struggles to find answers to the missing girl's disappearance at the same time as trying to control events from outside the borders of the estate. Based on the scenes in Portsmouth during the hunt for Sarah Payne, Walters highlights the ignorance of those who opt to drop out of education and exist on a life of drugs and crime. Page-turningly tense throughout, she skips between the search for a missing ten year old girl and the scenes gradually unfolding in the fortress-like estate. From the views of those involved in the peaceful protest to those suffering at the hands of the rebel insurgents, the pace never lets up till the final, murderous ending. - Lucy Watson