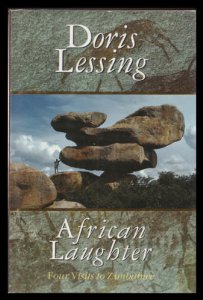 Review: Leasing, once a Prohibited Immigrant barred from her childhood homeland of Rhodesia by its white minority government, returns to what is now Zimbabwe - and in inimitably forthright style records her impressions. The author last visited her homeland in the late 50's, when the country was a British colony, not as rigidly segregated as South Africa but nonetheless dominated by a white ruling class that enjoyed a way of life impossible elsewhere. When she returned in 1982, Zimbabwe was just two years old, and blacks and whites were still bitterly divided as well as devastated by the ten-year bush war that had pitted blacks against whites as well as blacks against blacks. The countryside seemed equally devastated (...the game mostly gone. The bush was silent), and squatters were overfarming already fragile lands. Most whites whom Lessing met, including her brother, delivered what she called The Monologue, as much a racist critique as a display of the after-effects of a tremendous shock. On her three subsequent visits, the last made earlier this year, race relations proved healthier, but Prime Minister Mugabe's government seemed increasingly autocratic and corrupt; the economy was poorly organized along socialist lines; a terrible drought had ravaged the region; and unemployment continued to rise, especially among the young. On these visits, Lessing talked to a range of contacts, black and white; stayed on farms where white owners were trying out new crops to boost the local economy; accompanied the multiracial Book Team, which helps rural women create how-to textbooks; and traveled fearfully to her childhood home, where the beloved bush had disappeared and everything spoke of failure. Always the fair-minded realist, Leasing isn't overly optimistic about the future, but her sympathetic account of Zimbabwe's struggle to forge a common destiny is most worthwhile.