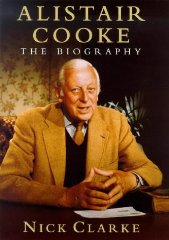 Review: For 53 years the debonair, mid-Atlantic tones of Alistair Cooke have graced the airwaves, bringing us a weekly Letter from America that told us more about happenings Stateside than any number of solemn, academic analyses ever did. But the man himself always remained something of an enigma. Now Nick Clarke, presenter of Radio 4's World At One, has delved into Cooke's past and discovered a rich and often surprising life story. For Cooke was very much a self-made man and beneath that mild demeanour was a lot of burning ambition. He was born into humble circumstances in Salford in 1908, under the name of Alfred Cooke. Within 25 years he had reinvented himself as Alistair, with no trace of a Northern accent, but instead a Cambridge graduate, sometime resident of Hollywood, friend of Charlie Chaplin and soon to marry into one of America's most famous families. n nBiographies of secondary characters such as Cooke can read like an awful lot of effort for not very much result. But here is a fine exception. Cooke's life really does illuminate the course of the century and the endless misunderstandings, divisions and strange, touching harmonies that underlie the Special Relationship between Britain and America.