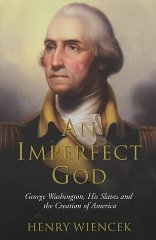 An Imperfect God: George Washington, His Slaves and the Creation of America

Fine condition.Macmillan,2004.First UK edition-first printing(1 3 5 7 9 8 6 4 2).Black hardback(gilt lettering to the spine) in fine condition, with Dj(creases on the outer and inner edges of the Dj cover,two small nicks on the Dj cover) in near fine condition.Illustrated with b/w photos,drawings,map.The book is new with a pencil mark impression on the edge of the first page of the book,light shelf wear inside the edges of the Dj cover.405pp including Notes,index.Price un-clipped.First edition.Heavy book.

Review:Was George Washington a dedicated slaveholder and, like Thomas Jefferson, a father of slave children? Or was he a closeted abolitionist and moralist who abhorred the abuse of African-Americans? In An Imperfect God: George Washington, His Slaves, and the Creation of America Henry Wiencek delves into Washington's papers and new oral history information to assemble a portrait of the first President of the United States that (while uneven in the telling) concludes that Washington supported emancipation by the time of his death. n nTo begin, Wiencek briefly addresses and dismisses the claim that Washington fathered a child with Venus, (a slave owned by Washingtong's brother, John Augustine). According to Wiencek, the President was likely sterile and such an affair would have been out of character for a man who prided himself on self-control. n nWiencek's real focus in An Imperfect God is Washington's personal and political position regarding emancipation. The primary ground for Wiencek's argument is Washington's will and a selection of private letters that elaborate a plan for providing land and means for his freed laborers. The will in particular offers powerful evidence of Washington's true intentions, including explicit declarations manumitting Washington's slaves after his death. As Wiencek shows, the document punctuated a long period of equivocation. n nAn Imperfect God is an imperfect book. Wiencek's occasional first-person accounts of his field research, including discussions with descendants of Washington, feel strangely out of place in what is elsewhere a straightforward biography punctuated with digressions into Washington's larger historical context. Further, Wiencek sometimes dabbles in hagiography and is willing to excuse much in a man who was a slaveholder his entire life. Yet, Wiencek is right to point out the distinctions of Washington among the slaveholding Founding Fathers. Readers can only imagine along with Wiencek the national tragedy that could have been averted had Washington provided the great example of emancipation while in office.

Title: An Imperfect God: George Washington, His Slaves and the Creation of America

An Imperfect God: George Washington, His Slaves and the Creation of America