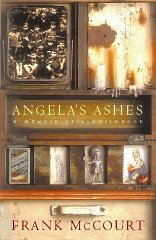 Angela's Ashes: A Memoir of a Childhood

Near fine condition.This edition first published by Flamingo,1999.First edition-first printing(1 3 5 7 9 8 6 4 2).Tan hardback(silver lettering to the spine,small mark and nick on the edge of the front cover) with Dj(two small nicks and crease on the edges of the Dj cover),both in near fine condition.Nice and clean pages as new with a a couple ink marks and light shelf wear on the outer edges,small nick and crease on the edge of the pages.Nice and clean book with light shelf wear.363pp.

Review: Worse than the ordinary miserable childhood is the miserable Irish childhood, writes Frank McCourt in Angela's Ashes. Worse yet is the miserable Irish Catholic childhood. Welcome, then, to the pinnacle of the miserable Irish Catholic childhood. Born in Brooklyn in 1930 to recent Irish immigrants Malachy and Angela McCourt, Frank grew up in Limerick after his parents returned to Ireland because of poor prospects in America. It turns out that prospects weren't so great back in the old country either--not with Malachy for a father. A chronically unemployed and nearly unemployable alcoholic, he appears to be the model on which many of our more insulting cliches about drunken Irish manhood are based. Mix in abject poverty and frequent death and illness and you have all the makings of a truly difficult early life. Fortunately, in McCourt's able hands it also has all the makings for a compelling memoir.

Title: Angela's Ashes: A Memoir of a Childhood

Angela's Ashes: A Memoir of a Childhood