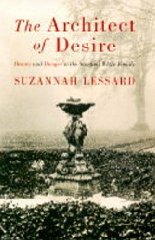 Architect of Desire: Beauty and Danger In The Stanford White Family

Review: In 1906, Suzannah Lessard's great-grandfather, the prominent architect, socialite, and hedonist Stanford White, was sensationally murdered by the husband of a showgirl White had seduced when she was 16. The acquittal of the killer on the grounds of insanity added to the scandalous gossip. In this beautifully written memoir, Lessard, a writer for the New Yorker, recalls growing up on the White family estate on Long Island, where the murder was a taboo subject. She evokes a sense of repressed and dark passion that infected the harmonious landscaping and architecture White had created. She writes of coldness that may feel like warmth, or violence that presents as lust for life. In this extraordinarily literary nonfiction mystery, Lessard slowly reveals that her family history held more secrets than the murder, and reaches a startling and controversial climax. --This text refers to an out of print or unavailable edition of this title. n nFrom Publishers Weekly nWhen a writer as gifted as Lessard makes her debut with a memoir as candid, perceptive and wrenchingly affecting as this history of her family, it is a signal event. While the complex character and magnificent accomplishments of Lessard's great-grandfather, celebrated Gilded Age architect and murder victim Stanford White, could indeed be the focus of a fascinating story, Whiting Award winner Lessard brings to her assiduously researched narrative a depth of understanding and a moral vision that imbue this work with a deeper significance. This is a mesmerizing narrative composed of many interlocking layers. Most simply, it is an account of the several ancestral lines from which Stanford White descended, and of how the genetic strain of genius and rampant sexual perversity affected his descendants. It's a lucidly detailed portrait of several upper-class social milieus from whose combined values White was formed: the Smiths of Smithtown, Long Island, unpretentious Yankee stock intimately tied to their land holdings over many generations; the Chanler siblings, eccentric and vastly wealthy orphans brought up on a splendid country estate in the Hudson River valley. It is an incandescent depiction of the classical monuments that White contributed to our culture, from the Washington Square Arch to a mansion at Newport. It is an evocation of Box Hill, the almost magically beautiful and serene family compound on Long Island, where Lessard was raised, and of the dark secrets that shadowed its idyllic vistas. It is a chronicle of the circumstances leading to demented millionaire Harry Thaw's revenging his wife Evelyn Nesbit's honor by murdering White in Madison Square Garden in 1906, with what we already know about the sensational event augmented by Lessard's portrait of the bizarre silence in which the family shrouded the crime. And it is a personal revelation of Lessard's own suffering, of the sexual abuse to which she and her siblings were subjected and of the reasons this perversion occurred and was tolerated. Lessard is a writer of mature talent, immense sensibility and poetic expression. Her understanding of the visceral and spiritual effects of architecture and music and landscape on the heart and the soul is both brilliantly instinctive and intelligently reasoned. As exposed by Lessard, what resulted from the family's genteel social code?which prohibited discussion of emotions and pain?is practically a textbook example of psychological dysfunction. That Lessard finally has been able?at great emotional cost?to tell her overlapping stories with simple eloquence is both a triumph for her and a resonating experience for her readers. I

Title: Architect of Desire: Beauty and Danger In The Stanford White Family

Architect of Desire: Beauty and Danger In The Stanford White Family