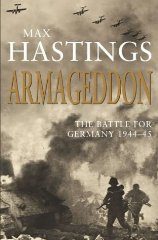 Fine condition.Macmillan,2004.First edition-4th printing(5 7 9 8 6 4).Black hardback(gilt lettering to the spine,two small nicks on the edges of the cover) with DJ(a couple of creases,nicks and scratch on the edges of the Dj cover),both in fine condition.Illustrated with b/w photos,maps.The book is new with two ink marks and small nick on the outer edges of the pages,small pencil mark impression on the edge of the first page of the book,light shelf wear inside the Dj cover.680pp including Sources and references,index.Price un-clipped.Heavy book(approx. 1.2 Kg).

Product Description : A stunning new book from one of Britain's most highly regarded military historians destined to be the Keegan of his generation One of the greatest military feats during the Second World War was the transformation of the German force's activities in the weeks following the battles in Holland and the German border, where the Allies had finally inflicted the greatest catastrophes of modern war on them. Somehow the Germans found the strength to halt the Allied advance in its tracks and to prolong the war to 1945. This book is the epic story of those last eight months of the war in northern Europe. '