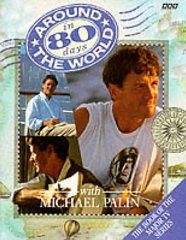 Product Description: In the autumn of 1988 Michael Palin set out from the Reform Club to circumnavigate the world, following the route taken by Phileas Fogg 115 years earlier. He had to make the journey in 80 days - accompanied by a BBC film crew - using only forms of transport that would have been available to Fogg. Their voyage took them from the opulence of the Orient Express to the stench of a Venetian refuse-collecting boat; from the lurching progress of an Egyptian camel called Michael to the heights of a hot-air balloon over Aspen,Colorado. Palin was attacked by a parrot in Hong Kong, given a close shave by an apparently blind Indian barber and accepted into the Brotherhood of Mariners by King Neptune himself - all recorded by the BBC film crew and resulting in a six-part television series on BBC1. This book is the story of, and the story behind, the making of that television series.

Title: Around the World in 80 Days

Keywords: Palin, Michael Travel & Exploration Around the World in 80 Days,