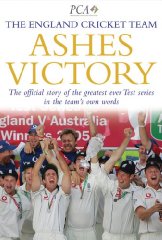 Ashes Victory: The Official Story of the Greatest Ever Test Series in the Team's Own Words

By: Team, The England Cricket

Fine condition.Orion,2005.First UK edition-first printing(1 3 5 7 9 10 8 6 4 2).Large format blue hardback(gilt lettering to the spine,small nick on the edge of the cover) with Dj(a couple of small nicks and scratches on the Dj cover),both in fine condition.Illustrated with many full colour photographs,stats.The book is new with a small nick and crease on the edges of the pages.208pp including Preface by Richard Bevan,Foreword by Marcus Trescothick,The Ashes Series 2005 Statistical Record.Price un-clipped.A collectable first edition.

Product Description: Written from the viewpoint of the changing room and the middle of the pitch, Team England's Ashes Diary is a blow-by-blow account of England's progress in the most dramatic Ashes series in history. With England's improvement under Michael Vaughan, the 2005 Ashes series was eagerly anticipated by all sports fans; all tickets were sold out months in advance. The first day at Lord's saw Australia spectacularly bowled out for just 190, and then England were 92 for 7 in reply. It seemed as though we'd seen one of the greatest days of Test cricket ever. In fact, it was only the beginning of a remarkable series...England went on to lose that match, before winning the second Test by 2 runs (the closest Ashes victory in history), drawing the third (when they failed to dismiss Australia's last pair), and then winning the fourth amid scenes of unbearable tension to go into the last Test with an unbeatable 2-1 series lead. In this fascinating inside account, the players reveal their emotions at key moments, and explain how they set about taking on the formidable Aussies.Packed with brilliant photographs of the best action and behind-the-scenes moments, this is a book that all who have thrilled to cricket this summer will want to keep and treasure for years to come.

Title: Ashes Victory: The Official Story of the Greatest Ever Test Series in the Team's Own Words

Keywords: Team, The England Cricket Sports, Hobbies & Games Ashes Victory: The Official Story of the Greatest Ever Test Series in the Team's Own Words,

Ashes Victory: The Official Story of the Greatest Ever Test Series in the Team's Own Words