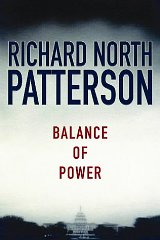 VGC.Macmillan,2003.First UK edition-first printing(1 3 5 7 9 8 6 4 2).Black hardback(gilt lettering to the spine,small nick on the edge of the cover) with Dj(small creases,nicks and scratches on the Dj cover),both in VGC.Nice and clean pages with a couple ink marks and light shelf wear on the outer edges,small creases on the edges of the pages,mark on the front of the Dj cover from a price sticker.The book is in VGC with light shelf wear on the Dj cover.616pp including List of the Characters.Price un-clipped.A collectable first edition.Heavy book.

From Publishers Weekly: Gun control and tort reform are the thorny issues tackled in this political drama, with Patterson hero Kerry Kilcannon ensconced in the White House and planning his marriage to former television journalist Lara Costello. Kilcannon (last glimpsed in Protect and Defend) has been president for less than a year when he is caught up in a potentially disastrous domestic crisis. Lara's sister, Joan, is brutally beaten by her husband, John Bowden, and Kerry, who rescued his own mother from his violent father, lets emotion get the better of him, asking the California DA to intervene. Meanwhile, in the political arena, Kerry is battling an NRA-type group called Sons of the Second Amendment (SSA). When the fuse Kerry lit under John Bowden explodes predictably (Bowden goes on a killing spree in an airport while the Kilcannons are away on their honeymoon), Kerry sees red and goes after the manufacturer of the gun Bowden used. The gun lobby circles wagons around the SSA and pushes a tort-reform bill called the Civil Justice Reform Act, which protects the manufacturers of any products from litigation by victims of criminals. Congress kowtows to America's captains of industry, with guns as the focal point: gun immunity hung in the balance of power between the President and the senator who intended to displace him. This is a Democratic nightmare scenario, and the novel paints a grim picture of the challenges facing gun-control advocates. Patterson is known for his intricate law-and-politics-laced crime fiction, but lawmaking trumps suspense in this novel and may leave his fans wanting for more. Patterson is a strong supporter of gun control-as he notes in an afterword-and his passion is evident here. Readers seeking pure entertainment may be disappointed, but those with the patience to follow the involved plot will learn much about gun policy debate.