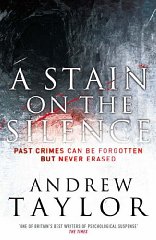 A Stain on the Silence

Product Description: Past mistakes can be forgotten - but never erased...The last person James wants to meet again is Lily. But now she's dying of cancer, and he is wholly unprepared for what she has to tell him. Twenty-four years ago, she gave birth to a daughter and James is the girl's father. James was just a teenager when he and Lily stepmother of his best friend Carlo had their brief affair. Practically part of the family, he would spend his summer holidays at their sprawling house in Chipping Weston, lapping up the breathtaking freedom and excitement. Though perhaps there was too much freedom and too much excitement because those days came to a terrible end. An end that James has been trying to forget ever since. Yet Lily has one more secret to reveal. Their daughter is now a wanted woman. She's on the run for murder. Soon James is compelled to reach back into the past and discover the other bitter fruits of his and Lily's unfortunate union. n nFrom the Author nDuring the last ten years I have sometimes felt that as a crime novelist I have been lurching steadily forwards with my eyes looking backwards over my shoulder. From the middle of the 1990s, after The Four Last Things, all my novels have been set in the past, mainly in the 1950s. The American Boy was set in the early nineteenth century. n nSteadily the urge grew on me to write a book about a place that had not existed when I wrote The Four Last Things ? this brave new world of ours where mobiles chatter and trill like birds, CCTV cameras perch on every corner, and people go googling on svelte laptops that no longer need to be attached to the rest of the world with wires. n nOut of this came A Stain on the Silence. The novel starts from three very simple premises: what if a childless man in his forties discovers that he has a daughter, the result of an affair 25 years earlier? What if the daughter is pregnant? And what if she's on the run for murder? n nBut though the setting is contemporary, the themes and dilemmas of the novel are as universal as love and death. It's a book about children and parents, and especially about missing children ? children who are lost; children who are stolen, children who lose themselves, and children who haunt the minds of those who do not have them.

Title: A Stain on the Silence

Keywords: Taylor, Andrew Literature & Fiction A Stain on the Silence,

A Stain on the Silence