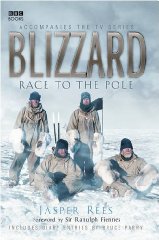 Product Description: In an ambitious experiment, Blizzard: Race to the Pole recreates the worst journey in the world-to discover the chilling truth behind the race to the South Pole. n nAt the beginning of the last century, reaching the South Pole was the greatest terrestrial journey left to man. To get to the bottom of the earth, traversing the very worst of what the natural world had to offer, would be an unparalleled achievement. By the spring of 1912, the race was over: Scott was dead and Amundsen, the victor, was on his way home. Ever since, a debate has raged over whether Scott was an arrogant incompetent or whether he was the victim of bad luck. Blizzard attempts to answer the question by re-running the race. Two teams, among the world's greatest adventurers, will be equipped entirely in the style of the original expeditions. The difference will be that both teams will start at the same time and from points within ten kilometers of each other. Now, for the first time, it will be possible to see whether it was luck or judgment that led Amundsen to victory and Scott to his death.

Title: Blizzard-Race To The Pole

Keywords: Blizzard-Race To The Pole,