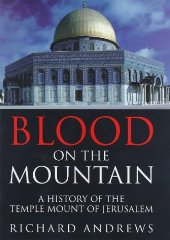 Blood On the Mountain: A History of the Temple Mount From the Ark to the Third Millennium

Product Description: Blood on the Mountain is the first book to recount the full story and reveal the many secrets of The Temple Mount of Jerusalem. It is a tale of bloodshed, human greed and depravity, unparalleled in history. Today the Mount is a walled complex with at its centre the famous Dome of the Rock, which covers a small area of exposed mountain known as the As Sakhra or Foundation Stone. Traditionally the birthplace of monotheism, where Abraham prepared the sacrifice of Isaac, the stone is believed to mark the location of King Solomon's Temple which contained the Ark of the Covenant. Solomon's Temple was destroyed by the Babylonians in 586 BC, and the Second Temple, built by Herod, became the focal point for much of Jesus' ministry. The As Sakhra is also sacred to Muslims as the place where Muhammed ascended into heaven on his night-time journey from Mecca. But despite such spiritual associations, the Temple Mount remains historically the most violently disputed single location on earth; more human blood has been spilt per square metre of its surface than at any other man-made human location in known civilisation, and as the Millennium draws to a close, and militant religious attitudes harden in Israel, the threat of renewed human bloodshed, on a massive scale, persists. This is a revelatory book, containing a central line of detection which unfolds on many levels of history, archaeology and faith. The story contains some of the most famous characters of history: King David, King Muhammad and Lawrence of Arabia. Blood on the Mountain exposes the true historical origins, and the real motives which lie behind the activities and involvement of such organisations as the Knights Templar and the Freemasons, and reveals new evidence about the physical properties and fate of the Ark of the Covenant.

Title: Blood On the Mountain: A History of the Temple Mount From the Ark to the Third Millennium

Keywords: Blood On the Mountain: A History of the Temple Mount From the Ark to the Third Millennium,

Blood On the Mountain: A History of the Temple Mount From the Ark to the Third Millennium