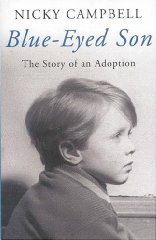 Blue-Eyed Son: The Story of an Adoption

VGC.Macmillan,2004.First edition-first printing(1 3 5 7 9 8 6 4 2).Blue hardback(silver lettering to the spine,crease and small nick on the edges of the cover) with Dj(some nicks,scratch and crease on the Dj cover),both in VGC.Nice and clean pages with a small nick and light shelf wear on the outer edges,small marks/nicks on the edges of some of the pages.The book is in VGC with light shelf wear.351pp including Postscript.Price un-clipped.First edition.

Product Description: Nicky Campbell, the Radio 5 Live and BBC1 Watchdog presenter, was adopted as a baby into a comfortable Protestant Scottish family. He always knew he was adopted, but didn't begin searching for his birth mother until he was in his thirties. When he found her, what she told him came as a shock. The clash of cultures, creed, and ideology between his parent's world and the world he grew up in couldn't be more striking. In this refreshingly candid book, he tells the story of his journey to find his parents, the dark secrets that have been revealed, and the journey he had to make after finding them. n nAbout the Author nNicky Campbell has been a radio broadcaster since he graduated from Aberdeen University. He has worked at London's Capital Radio, Radio 1 and, since 1997, has presented a hugely popular show on Five Live. He is also a highly regarded television presenter, having appeared on such diverse shows as Wheel of Fortune and Newsnight, Top of the Pops and Panorama, and currently fronts BBC1's Watchdog.

Title: Blue-Eyed Son: The Story of an Adoption

Blue-Eyed Son: The Story of an Adoption