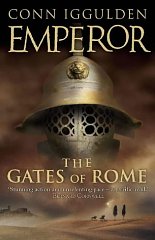 The Gates of Rome (Emperor)

VGC.HarperCollins,2003.First edition-first printing(1 3 5 7 9 8 6 4 2).Brown hardback(gilt lettering to the spine) with Dj(a couple of nicks,scratches and crease on the Dj cover),both in VGC.Nice and clean pages with light shelf wear on the outer edges,small mark on the edge of page 41,very small mark and pencil mark impression on the edges of the first two pages of the book.The book is in VGC with light shelf wear.Price un-clipped.408pp.A collectable first edition-first printing.

Product Description: The astonishing life of Julius Caesar is recreated in a magnificent new novel that brilliantly interweaves history and adventure. Emperor: The Gates of Rome is an epic tale of ambition and rivalry, bravery and betrayal, from an outstanding new voice in historical fiction. From the spectacle of gladiatorial combat to the intrigue of the Senate, from the foreign wars that created an empire to the political conflict that almost tore it apart, the Emperor novels tell the remarkable story of the man who would become the greatest Roman of them all. On an estate just outside Rome in the first century BC, two boys share the hardships of a traditional education as they prepare for lives as soldiers and leaders, friends and rivals. Yet Gaius and Marcus have barely reached manhood when their home is suddenly threatened by slave riots and they have to battle for their lives before fleeing to Rome. Forced to maker their own way in the most exciting city in the world, the young men waste no time in savouring all its temptations -- and dangers. For a titanic power struggle is about to explode. Soon citizen will fight citizen in a bloody conflict that will shake the Republic to its core. And Julius Caesar will be in the thick of the action.

Title: The Gates of Rome (Emperor)

The Gates of Rome (Emperor)