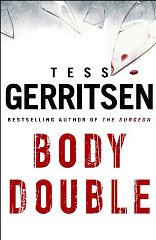 Fine condition.Bantam Press,2004.First edition-first printing(1 3 5 7 9 10 8 6 4 2).Black hardback(silver lettering to the spine,small nick on the cover) with Dj(two small creases and nick on the edges of the Dj cover),both in fine condition.Nice and clean pages as new with a small nick and light shelf wear on the outer edges,light shelf wear on the Dj cover.339pp.Price un-clipped.First edition.

From Publishers Weekly: Pregnant women play key roles in this bone-chilling fourth novel in Gerritsen's edgy, suspenseful series of thrillers featuring Boston Medical Examiner Maura Isles and Homicide Detective Jane Rizzoli. Both of the usually gritty crime fighters are uncharacteristically vulnerable. Rizzoli is carrying her first child, and Isles--divorced and alone at age 40 and suddenly, unsettlingly aware of her biological clock--is experiencing decidedly unspiritual feelings for her priest. As the novel begins, Isles--an adopted child who never knew the identity of her birth parents--is confronted by the corpse of a murdered woman who is apparently her identical twin. Another detective, Rick Ballard, comes forward to say that he knew the victim and is certain her killer is a powerful pharmaceutical baron known to have stalked her. Isles falls for the handsome Ballard, but she isn't convinced by his theory, and she launches an investigation into her sister's past, following the trail to a state correctional facility and a schizophrenic inmate who may be her mother. This opens the cobwebbed pages of a nightmarish family album and leads Isles to a remote cabin in Maine where the long-dead body of a pregnant woman is discovered buried in the woods. The killer, Isles discovers, has been murdering pregnant women for decades, making periodic sweeps of the country. Meanwhile, brief scenes chronicle the diabolical kidnapping of an affluent pregnant housewife who is kept buried in a crude coffin. An electric series of startling twists, the revelation of ghoulishly practical motives and a nail-biting finale make this Gerritsen's best to date.