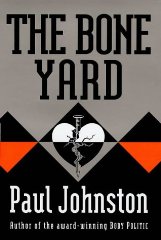 Near fine condition.Hodder & Stoughton,1998.First UK edition-first printing(10 9 8 7 6 5 4 3 21).Black hardback(gilt lettering to the spine) with Dj(two small creases,nicks and scratch on the Dj cover),both in near fine condition.Nice & clean pages as new but slightly tainted on the outer edges,small crease on the edge of the pages,small pencil mark impression on the edge of the first blank page of the book.Price un-clipped.297pp.First edition.

Review: The acclaim that greeted Johnston's earlier Body Politic, which won the Crime Writers' Association Award for best first crime novel, was accompanied by a fierce debate: Was this a crime novel or a science fiction novel? Similar argument is likely to surround this equally accomplished follow-up, set in 21st-century Edinburgh. But although the trappings may be futuristic, they're not excessively so--this is essentially the hard- boiled Scotland we're familiar with from writers such as Ian Rankin. Johnston again has a flinty satiric edge in his tale of grisly murder. In his oppressive, crime-free independent city state, run by a council of city guardians, a series of murders is upsetting the rigidly regulated status quo. The victims have music tapes planted inside their bodies: and Johnston quickly has his anti- establishment private eye hero Quintilian Dalrymple in the thick of things, struggling with low-life and official corruption (accompanied by his Watson, Davie). When the trail runs cold, Dalrymple finds that the mysterious Bone Yard is the key to the mutilations. All he has to do is figure out what it is. n nAs before, Johnston fills in the fascinating background of his sinister society with seamless skill. If the shock and impact of his debut thriller is less evident this time, that's perhaps inevitable--but the gains (not least in razor-sharp dialogue and satisfyingly off- kilter plotting) are considerable.