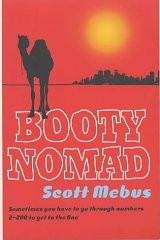 From Publishers Weekly: Yet another hollow Nick Hornby knock-off, Mebus's charm-impaired first novel tells the story of David, a 20-something living in Manhattan who spends most of his time trying to get over his last girlfriend (the Eater of Souls, as he dubs her) while simultaneously looking for a new soul mate (You need to find another love of your life to eventually screw over). During the day, David pretends to work at a children's television show, but spends most of his time worrying about his fantasy baseball team. At home in his tiny apartment, he taps away at a screenplay (I think I would be a fantastic screenwriter), and every once in a while he practices his electric guitar by jamming through the wall with his neighbor. But for the most part David obsesses about women, the one he can't forget (his ex) and this week's girl of his dreams (the Goddess, who is on the rebound herself). Meanwhile, David's friends slack off at their own jobs, drag David to strip clubs and somehow still find time to ask the important questions concerning men and women: You gonna get some? Staccato pacing, tired references (Victoria's Secret, hot yoga chicks) and unfunny gags will lose most readers, despite occasional flashes of sharp urban observation. Mebus strives for naughty wryness, but winds up just sounding callow.