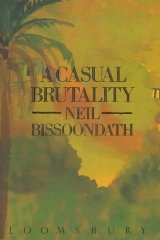 Review: Moving between two worlds, Canada and the Caribbean, as he did in his acclaimed story collection (Digging up the Mountains, 1986), Bissoondath uses his first novel to probe the dilemma of the Third World professional, caught between an adopted country that works and a homeland rotted by violence and corruption. Raj Ramsingh is a citizen of Canada but a native of Casaquemada (a thinly disguised version of the author's Trinidad). Raised by his East Indian grandparents, but with no desire to inherit their successful store or their Hindu culture, Raj leaves for Toronto at age 18 to study medicine; in due course, he becomes a doctor, marries a white Canadian (Jan), and has a son (Rohan). Meanwhile, Casaquemada has become oil-rich; though he likes Canada, Raj eventually (he's now 32) returns to Casaquemada with wife and child, in part lured by the prospect of easy money, in part needing the safety net of family. He finds a country grown violent and corrupt: I was seeking protection from people who needed protection. His cousin Surein is importing guns; his uncle Grappler, a decent but bone-weary senior civil servant, is talking about payol solutions (Like Argentina. Like Chile); a former classmate, Madera, has evolved into a sinister hybrid of soldier and policeman, executing criminals on back roads. In the end, a state of emergency is declared; while Raj is away tending his dying grandfather, soldiers come to his house and kill Jan (Rohan, too) when she resists arrest. The men in green arrive in a Grenada-style operation, as Raj takes the last flight out, back to Toronto. Bissoondath has combined a leisurely Bildungsroman with a political thriller; the result, predictably, is a disaster: a sluggish, exasperatingly pretentious work that prates about the destiny of Casaquemada while leaving Raj's professional and marital circumstances shadowy and unrealized; Raj's Toronto practice gets a couple of lines, while wife Jan (as Raj himself says) never really came into focus for me. A major disappointment. (Kirkus Reviews) n nProduct Description nA novel about the quest of one man to comprehend how a national tragedy so cruelly and illogically turned into personal tragedy, while capturing at the same time the laughter and colour of island life as the action moves from Toronto to the Caribbean. By the same author, Digging Up the Mountains.