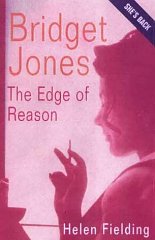 Bridget Jones: The Edge of Reason

Near fine condition.Picador,1999.First edition-first printing(1 3 5 7 9 8 6 4 2).Black hardback(gilt lettering to the spine,two small nicks on the edges of the cover) with Dj(a couple of creases ,nicks and a scratch on the Dj cover),both in near fine condition.Nice and clean pages with a ink mark,nick and light shelf wear on the outer edges,a couple of creases and nicks on the edges of the pages,small pencil mark impression on the first blank page of the book.Nice and clean book with light shelf wear.422pp.Price un-clipped.First edition.

Review n7:15 am Hurrah! The wilderness years are over. For four weeks and five days now have been in functional relationship with adult male thereby proving am not love pariah as previously feared. So begins The Edge of Reason, Bridget Jones' hilarious foray into the not-so-sexy realities of relationships, the laughable legions of self-help theories and a television career that would have her model tiny shorts next to a blow-up of Fergie in gym wear. Picking up where Bridget Jones' Diary left off, everyone's favourite singleton has finally landed her love, Mark Darcy. However, she's finding--among other things--that her dreamboat is less than ideal. Aside from never doing the washing up or foraging through the isles at Tesco, Mark, it seems, has taken an interest in the viperous jellyfish Rebecca, who has thighs like a baby giraffe and a penchant for boyfriend snatching. n nIf that isn't enough, Richard I'm thinking bunny girl! I'm thinking Gladiator! I'm thinking canvassing MP! Finch, Bridget's smarmy, cocaine-encrusted boss and Executive Producer of Sit Up, wants her to be the show's clown, in effect making her the arse of television. What's more, a builder who has an obsession for large, slimy fish seems to have forgotten about the hole he knocked out in her flat, putting her entire life on display for the neighbours. Not to mention a mother who wants her to go to see Ms. Saigon with a Kikuya tribesman hijacked from Kenya. n nNever fear, Bridge's singleton posse--Shazzer, Jude and Tom--are always a phone call away and armed with bot

Bridget Jones: The Edge of Reason