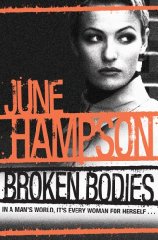 From Publishers Weekly: Set in mid-1960s Britain, Hampson's overly complicated follow-up to Trust Nobody begins with an anonymous woman's cold-blooded murder after sex. In the main story line, Daisy Lane has returned to her hometown of Gosport, still reeling from the violent deaths in Trust Nobody of her husband, Kenny, murdered by a fellow con in prison, and her lover, Eddie, Kenny's older brother. Daisy, who's recently given birth to Eddie's son, is determined to bring down Eddie's killer, Roy Kemp, a notorious London thug who runs with the Kray twins, real-life criminals who terrorized the East End in the 1950s and '60s. Hampson muddies the narrative with confusing side plots, one of which involves the dead woman in the opening.Those interested in the gritty underside of London during this period might look instead to The Lost and other crime novels by Roberta Kray, the wife of one of the Kray twins.