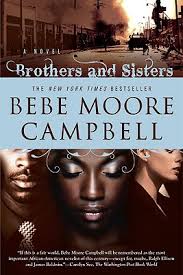 VGC.William Heinemann,1995.Reprinted edition.Black hardback(gilt lettering to the spine) with Dj(a couple of creases,nicks and scratch on the Dj cover),both in VGC.Nice and clean pages with a couple ink marks and slightly tainted on the outer edges,two small nicks,crease and slightly yellow on the edges of the pages.The book is in VGC with light shelf wear on the Dj cover.476pp.Price un-clipped.

From Publishers Weekly: Further demonstrating the authoritative grasp of racial issues and the candid picture of African American life she brought to her first novel, Your Blues Ain't Like Mine , Campbell sets this story in Los Angeles during the aftermath of the Rodney King beating, the acquittal of the charged policemen and the subsequent riots. Her heroine, Esther Jackson--seemingly self-confident but quiveringly intense--has a good position as regional operations manager of a bank. Raised on Chicago's South Side, Esther has glass-ceilinged her way to a two-bedroom house in an L.A. suburb. But along with her success, Esther carries the contradictory burdens of compromise, determination and humiliation required of women of color who move up the corporate ladder. Campbell develops Esther's character by depicting her relationship with Tyrone, a man educationally, socially and economically beneath her; her growing friendship with white loan officer Mallory Post; the accusations surrounding her African American boss Humphrey's attempted rape of Mallory; the suspicions that her hiree, La Keesha, is stealing from inactive accounts at the bank. Esther learns about watching her own back while responding to the needs and realities of her friends' lives. Campbell's intriguing (if not always three-dimensional) cast of characters reveal the fears and hopes of people caught in a web of shrinking opportunities and institutionalized stereotypes of race, class and gender. Adroitly using the great racial divide of Los Angeles, this absorbing novel explores the intricacies of experience, knowledge and bias which perpetuate inequalities and segregated lives.