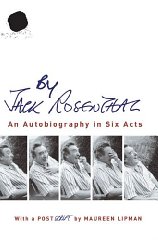 By Jack Rosenthal: An Autobiography in Six Acts

Mint condition.Robson Books,2006.First UK Paperback edition-first printing(10 9 8 7 6 5 4 3 2 1).Large format paperback(crease,two small nicks and scratch on the cover) in mint condition.Illustrated with b/w photos.The book is new with a crease and very small mark on the edge of page 185,two small nicks on the outer edge of the pages.Foreword by Amy Rosenthal.403pp including List of abbreviations,postscript by Maureen Lipman.First edition.

Product Description: Jack Rosenthal had always resisted writing an autobiography, until he hit on an original way of writing it that excited him-it would be as a screenplay, with himself as the central character, and the supporting cast drawn from the many wonderful and eccentric people who touched, shaped, and shared that life. What a prospect, coming from the author of such memorable classics as Bar Mitzvah Boy, The Evacuees, London's Burning, The Knowledge, and P'tang Yang, Kipperbang, a writer who uniquely won three successive BAFTA Awards. The story moves from Manchester in the 30s-via school, evacuation, university, the Navy, the early days of Granada TV, marriage and life with Maureen Lipman, fatherhood, writing the famous plays, and working with Streisand-to Muswell Hill in the 90s. Sharp, funny, evocative, teeming with memorable stories and characters this is an autobiography like no other.

Title: By Jack Rosenthal: An Autobiography in Six Acts

By Jack Rosenthal: An Autobiography in Six Acts