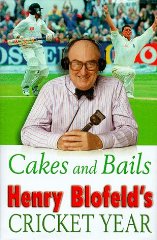 Review: Cakes and Bails finds Henry Blofeld, or Blowers as he is known to dedicated listeners of Radio 4's Test Match Special, on top form. Beginning with an account of a drunken champagne weekend in the company of Mike Atherton and Graham Gooch, the book proceeds to weave a delightful (and at times slightly unsteady) path through the 1998 cricketing year, from England's agonising winter defeat in the Caribbean, to the dramatic triumph over the South Africans in the summer. n nLike his Test Match commentaries, Blofeld's prose has a logic all of its own, as he moves from indignant outrage at the incompetence of England's cricketing establishment, to wonderfully dry descriptions of players and colleagues, crowned by the continual reappearance throughout the book of GLY--Geoffrey Boycott, the Greatest Living Yorkshireman. There are some lovely portraits of the players who set the season alight with Their performances, including the effervescent Jonty Rhodes, the heroic Angus Fraser (nicknamed The Schoolmaster by Blowers), and Mark Ramprakash, chosen for his brilliant maiden test century in Barbados. n nCakes and Bails is however, at its best in describing the sheer drama and tension which comes from a close test match, and Blofeld has seen quite a few over the last year. His description of Atherton's monumental battle with Allan Donald throughout the summer series is particularly memorable, evidence if any were needed that there is more to life in the Test Match Special commentary box than just cakes and champagne! Amazon cricket fans will also be amused by Blofeld's befuddled description of the creation of a website solely dedicated to his thoughts on the great game; whoever said that cricket was falling behind the times?