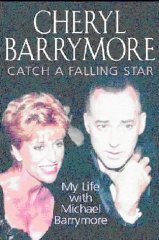 Catch a Falling Star: My Life with Michael Barrymore

Product Description: Cheryl Barrymore first learned that her husband was gay when he announced it publicly on national radio in 1995. People assumed that she must have had her suspicions, but it came as a complete shock. Michael's astounding lack of consideration and compassion for his wife, evident in the manner of his revelation, were simply the latest in a long list of grievances. There was now no other option for her: their eighteen-year marriage was publicly over. In Catch a Falling Star, Cheryl Barrymore tells the truth about the reality behind the public image of Britain's best-loved performer. She reveals the nightmare existence that she had to endure because of Michael's dark side: the drink, drugs and headline-grabbing behaviour. Cheryl stood by her husband throughout his attempts at rehabilitation and bouts of insane behaviour only to watch helplessly as he was manipulated by the people surrounding him. This explosive account of what is was really like to live with an entertainer loved by millions contains new revelations that will make headlines.

Title: Catch a Falling Star: My Life with Michael Barrymore

Catch a Falling Star: My Life with Michael Barrymore