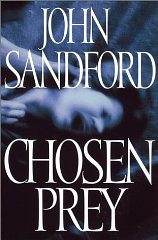 Fine condition.G.P Putnam's Sons,2001.First US edition-first printing(10 9 8 7 6 5 4 3 2 1).Red hardback with black borders(red lettering on the front cover and spine) with Dj(two small nicks and crease on the Dj cover),both in fine condition.Nice and clean pages as new with a very small mark and nick on the outer edges,small crease on the edge of the pages,pencil mark impression on the edge of the first blank page of the book.Nice and clean book with light shelf wear on the back of the Dj cover.357pp.Price un-clipped.First edition.

From Publishers Weekly: The 13th title in the Prey series (Easy Prey, etc.) has wealthy Minneapolis Deputy Police Chief Lucas Davenport in up to his Porsche-driving fingertips. Lucas is trying to track an elusive serial killer while reuniting with former fianc‚e Weather Karkinnen who after a couple of years' estrangement following her narrow escape from a crazy biker in one of Lucas's former cases has suddenly decided she wants to have his baby. Weather is a formidable distraction, but the killer revealed to readers from the beginning as James Qatar, a suave professor of art history with a yen for strangulation proves to require even more attention. Soon after the body of a young blonde is found in a partially excavated grave on a remote wilderness hillside, a deputy sheriff from backwater Wisconsin shows up with a file containing case histories of several women reported missing in Wisconsin and Minnesota over a nine-year period. Fearing the worst, Lucas orders the hillside surveyed; subsequent excavation uncovers seven more bodies. The art world connections of some of the victims and the discovery of pornographic drawings suggests a link to the art community around the local Catholic university. As the net tightens, the usually coolheaded Qatar, already plotting the fate of a daring fabric artist in cahoots with the police, gradually loses control. With Lucas and his team watching his every move, he eludes surveillance and carries out a final desperate attack. Sandford is in top form here, his wry humor and his development of Lucas's combative, affectionate relationship with Weather lighting up the dark of another grisly investigation.