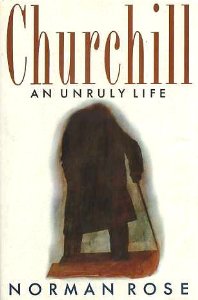 Review: It's hard to write a bad biography of Churchill but even harder to find something new to say, and historian Rose (Hebrew Univ., Israel) doesn't find much. He is, however, particularly good on his subject's personality: Of course I am an egotist, Churchill once told Clement Attlee. Where do you get if you aren't? Self-centered, frequently bombastic, living in great houses, surrounded by masses of servants, he was saved from some of the worst effects of this self-indulgence by his sense of humor: When his faithful assistant, Eddie Marsh, told him that he favored kissing [Uncle Sam] on both cheeks, Churchill replied, But not on all four. Rose is also perceptive on the politician's relationship with his wife, Clementine, which was somewhat more complicated than is usually supposed. While it was a love match, both sometimes felt the need to get away from each other, and her judgment, both political and personal, was frequently better than his. On some substantive matters, Rose is neglectful of recent research, offering less than satisfactory coverage of Churchill's role as a social reformer, his choice of the Board of Trade as his first Cabinet post, his more intricate political calculations, and his success in becoming more acceptable to the Labor Party before WW II - about which a number of authors have written well in the past few years. The last omission in particular leads the author to make an assertion that would be rejected by many historians of the period, namely that the Earl of Halifax could have become prime minister in 1940 if he had wanted to. Rose responds persuasively, however, to the recent charge that Churchill mined Britain by refusing to make a compromise peace with Hitler, a suggestion that depends on a reliability that Hitler was never inclined to demonstrate. Sifts the old soil quite pleasantly, but doesn't break new ground.