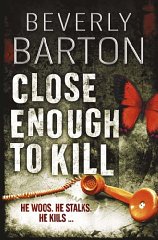 Near fine condition.Avon/HarperCollins,2007.First UK edition.Red hardback(silver lettering to the spine) with Dj(two scrathes,small nicks and crease on the edges of the Dj cover),both in near fine condition.Nice and clean pages as new with a small colour mark and ink mark on the outer edges,small nick and crease on the edges of the pages,very small mark on the edge of the first blank page of the book.Nice and clean book with light shelf wear.447pp.Price un-clipped.A collectable first edition.

Synopsis: He Woos. He Stalks. He Kills. He's their secret admirer, wooing them with phone calls, love letters and special gifts. From a distance, he admires them. Desires them. Despises them. And when he gets close enough, he kills them all...Adams County, Alabama is the kind of town where everyone knows each other's business, the kind of place where doors stay unlocked. Until a psychopath comes calling. Dubbed 'The Secret Admirer', he woos his victims with phone calls, love letters and gifts, before stalking, kidnapping and then brutally murdering them. A terrifying game is underway. Sheriff Bernie Granger - in her first big case - is desperate to stop a twisted serial killer before another woman is slaughtered. But is she getting closer to catching him - or being drawn even deeper into his deadly web?