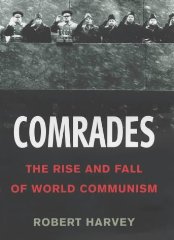 Comrades: The Rise and Fall of World Communism [Illustrated]

Product Description: Today global communism seems just a terrible historical memory, an expressionist nightmare as horrific as Nazism and the Holocaust, or the slaughter in World War I. Was it only just over a decade ago that stone-faced old men were still presiding over workers' paradises in the name of the people while hundreds of millions endured grinding poverty under a system of mind-controlling servitude which did not hesitate to murder and imprison whole populations in the cause of progress? Or that the world seemed under threat from revolutionary hordes engulfing one country after another, backed by a vast military machine and the threat of nuclear annihilation? In the 1970s, with the fall of South Vietnam, Cambodia and Laos, the march of Marxism-Leninism across the world seemed irresistible. Less than two decades later the experiment had collapsed, leaving perhaps 100 million dead, as well as economic devastation spanning continents. Even China now increasingly embraces free market economics. Only in a few backwaters does communism endure, as obsolete as rust-belt industry. This book is a global narrative history of that defining human experience. It seeks to weigh up the balance sheet: why did communism occur largely in countries wrenched from feudalism or colonialism to 20th-century modernism, rather than - as Marx had predicted - in developed countries groaning under the weight of a parasitic middle class? Were coercion and state planning in fact the only way forward for backward countries? What was the explanation for communism's appeal - not least among many highly intelligent observers in the West? Why did it grow so fast, and collapse with such startling suddenness? Robert Harvey sets out the whole epic story, a panorama of human idealism, cruelty, suffering and courage, and provides an often intriguing analysis.

Title: Comrades: The Rise and Fall of World Communism [Illustrated]

Comrades: The Rise and Fall of World Communism [Illustrated]