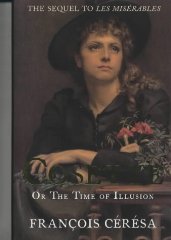 Cosette or the Time of Illusions

VGC.Macmillan,2003.First edition-first printing(1 3 5 7 9 8 6 4 2).Black hardback(gilt lettering to the spine) with Dj(some creases,scratches and nick on the Dj cover),both in VGC.Nice and clean pages but with a few creases and nicks on the edges,small pencil mark impression on the edge of the first blank page of the book,light shelf wear on the Dj cover.360pp.Price un-clipped.First edition. P

roduct Description: Franois Crsa takes up the story in September 1833, two months after the death of Jean Valjean. His spirited daughter Cosette is now eighteen and living a seemingly idyllic life. Married to the wild and carefree Marius she is happy tending to her new house and spending time in her rose garden. However, her new-found happiness is threatened by her husband's close association with the cold and heartless dandy, the marquis de Amdee. Under his influence Marius becomes immersed in the seedy underbelly of Parisian life, edging him ever closer to danger. During the Mardi Gras festivities Marius unwittingly falls into a trap and is sent to a penal colony, like Jean Valjean before him. Thinking him dead, Cosette despairs until the oddly familiar priest, Verjat, begins to discover the reality behind the illusion. On a quest for redemption, Verjat uses all the skills from his previous life, as Inspector Javert, to help the distraught Cosette and the imprisoned Marius. From the salons to the brothels, from the cafs to the stench of prison, the characters criss-cross, brush past each other, encounter each other anew, against a backdrop of the events of 1833 to 1836. An instant bestseller in France, Cosette is a feast for fans of the both the novel and the stage show.

Title: Cosette or the Time of Illusions

Keywords: Ceresa, Francois Cosette or the Time of Illusions,

Cosette or the Time of Illusions