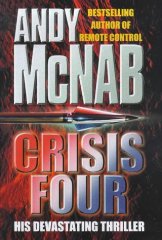 Near fine condition.Bantam Press,1999.First edition-first printing(1 3 5 7 9 10 8 6 4 2).Black hardback(silver lettering to the spine) with Dj(very small tear on the edge of the Dj cover,small nick and a couple of scratches on the Dj cover),both in near fine condition.Nice and clean pages as new but slightly yellow on the outer edges,small ink mark on the edges of the pages.Nice and clean book with light shelf wear inside the edges of the Dj cover.412pp.Price un-clipped.

Review: Crisis Four is Andy McNab's fourth book and his second work of fiction, but he has already established himself as a brand name. His trademark is the SAS and dirty operations, so it will come as no surprise to anyone that the hero, Nick Stone, is a hard but fair ex-SAS man, now working for À250 per day as a freelance agent for British Intelligence on undercover missions which will be denied if they go wrong. The basic story is relatively straightforward. Stone undertook a mission to Afghanistan in the late 80s with a mysterious femme fatale, the posh Sarah; they had a fling and she promptly dumped him on her return. In 1995, they meet up briefly on another undercover mission to Syria which starts to go horribly wrong as Sarah appears to be working to a different briefing. Then, in 1998, Stone gets a summons on his pager to meet his bosses at Gatwick. Sarah has gone AWOL from her apartment in Washington DC and Stone's job is to find her. This he ingeniously achieves quite quickly and there then follows a long, tense chase across the US. Sarah's true past, and the secret that she holds, is gradually revealed and the ending is truly gripping. n nFor all McNab's authentic detail--we get lots of information on how to kill people and survive attacks--reading Crisis Four is a bit like playing Tombraider on the computer. It's a compelling other world, where reality is only paid lip service to, but the action comes so thick and fast that you can't help turning the page. And this is what marks Crisis Four as a cut above the average thriller. It is an unashamedly blokeish book--you won't find much in the way of subtlety of characterisation--though compared to Dick Francis McNab is positively Henry James--and you have to put up with the odd few pages that read more like instruction manuals for military hardware than narrative, but these are relatively minor quibbles. So many times you get to the end of a thriller only to wonder why on earth you bothered; Crisis Four delivers on its promises.