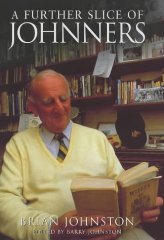 A Further Slice of Johnners

Product Description: When Brian Johnston was a schoolboy his reports were full of such phrases as talks too much in school and apt to be a buffoon. Later millions of radio listeners were glad that some things never changed. Johnners brought his wit and personal charm to an enormous range of BBC radio and television programmes for nearly 50 years, from In Town Tonight and Down Your Way to Test Match Special. After Brian died in 1994, Christopher Martin-Jenkins wrote: It is hard to believe that anyone in the history of broadcasting has induced such widespread affection. In this book Barry Johnston has edited highlights from three of his father's books, It's Been a Lot of Fun, Brian Johnston's Down Your Way and More Views From the Boundary, covering Brian's early days, from his childhood in Hertfordshire, his schooldays at Eton and Oxford, his job in the family coffee business in the City and his service with the Grenadier Guards during World War II. There is also a selection of the most memorable characters and locations from his 15 years on the Radio Four programme Down Your Way. Finally there is a collection of Brian's popular View From the Boundary interviews on Test Match Special, including conversations with Eric Idle, John Major and Peter O'Toole. n nAbout the Author nBrian Johnston was one of the best-loved figures on radio and television and will always be remembered as 'the voice of cricket'. He joined the Outside Broadcasts Department of the BBC in 1946 and was a cricket commentator for the next 48 years, most notably as a member of the Test Match Special team. He commentated on state occasions and royal weddings and events such as the Boat Race and he also presented 733 episodes of Down Your Way. He died in 1994 at the age of 81. Barry Johnston is Brian's eldest son and has edited several of his father's books including Letters Home 1926-1945. A Delicious Slice of Johnners and Another Slice of Johnners.

Title: A Further Slice of Johnners

A Further Slice of Johnners