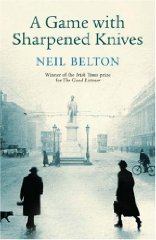 A Game with Sharpened Knives

VGC.Weidenfeld & Nicolson,2005.First UK edition-first printing.Green hardback(gilt lettering to the spine) with Dj(two small creases and nick on the edges of the Dj cover),both in VGC.Nice and clean pages but with three tears and nicks at the edge of the pages 205-210,small ink mark and nick on the outer edge of the pages.The book is in near fine condition except for the tears on the edges of the pages.328pp.Price un-clipped.

Product Description: This is a novel based on the life of Erwin Shrodinger, one of the giants of 20th-century scientific thought. n nNeil Belton concentrates on the time Shrodinger spent living in Ireland. In 1938, Germany invaded Austria and Schrödinger was dismissed from his university post. The Prime Minister of Ireland at the time, Eamon de Valera, was a mathematician and invited Schrödinger to join the newly established Institute for Advanced Studies in Dublin. Schrödinger emigrated there with few possessions and little money. He remained for 17 years, often turning his attention to philosophical questions about physics and its relationship to other fields. n nThrough this backdrop of historical fact Belton has fashioned a novel of immense power, brilliantly evoking the isolated Ireland of the Second World War as well as the character of a complicated genius.

Title: A Game with Sharpened Knives

A Game with Sharpened Knives