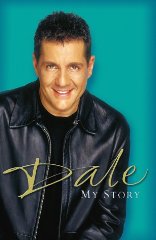 Product Description: Dale Winton is one of the most popular stars on television today, enjoying the support of fans of all ages. In this autobiography, Dale talks openly about his difficult family life, including the death of his father on the day of his bar mitzvah (a man with whom he had a very difficult relationship) and the devastating suicide of his mother, whom he adored. He also speaks frankly about love and relationships, his weight problems, and his dreams of becoming a star. Dale's professional life began as a DJ on the London club circuit, a move that led to work on radio and then television. But his rise to stardom really took off with Supermarket Sweep, from where he moved on to prime-time television with such shows as The National Lottery, The Other Half and his own Christmas specials and celebrity guest shows. But life in the spotlight is not, and has not always been easy, and Dale talks candidly about the highs and lows of media success and life in the precarious world of entertainment.