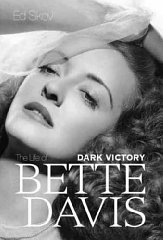 Near fine condition.Aurum Press,2007.First UK edition-first printing(10 9 8 7 6 5 4 3 2 1).Black hardback(grey lettering to the spine) with Dj(a couple of small nicks,crease and scratch on the Dj cover),both in near fine condition.Illustrated with b/w photos.The book is as new but with an inscription on the edge of the first blank page of the book,two small nicks on the outer edges of the pages.Nice and clean book as new except for the written inscription.482pp including Notes,bibliography,list of illustrations,index.Price un-clipped.A collectable first edition.Heavy book.

Product Description: Bette Davis was one of Hollywood's most durable, feisty and, unusually for film stars - genuinely witty heroines. Her career spanned some fifty years, and more than a hundred movies: even at the very end of her life she was appearing in Lindsay Anderson's The Whales of August with the equally venerable Lilian Gish. She was famously difficult in later life, bitchy towards co-stars like Joan Crawford, and consumed legendary quantities of alcohol. She has been the subject of several biographies, but so red-blooded was her character, and so prolific her career, that another is not too many. Ed Sikov has done numerous new interviews for this book. He also analyses the evolving appeal of Bette Davis to a modern audience - she, and the redoubtable female roles she made her own - has become a major gay icon, for example.