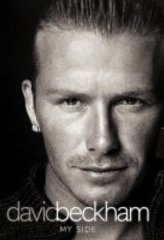 Product Description: With endless newspaper column inches devoted to one of the most talked about men in the world, it seems that we know everything there is to know about David Beckham. Or do we? This is Beckham's life story in his own words. The book deals with his complex relationship with United boss Alex Ferguson and looks at how he handles the pressure of playing alongside some of the most volatile footballers of his generation, from the likes of Cantona, Schmeichel and Keane. It tells the England story, from being vilified by the nation before returning as the prodigal son and almost single-handedly guiding his country as captain to the 2002 World Cup Finals. From Beckham himself, we gain an insight into the family man behind the famous footballer, the international model and fashion leader. He describes how he first met and then married ex-Spice girl Victoria Adams and the upbringing of their two children Brooklyn and Romeo. He goes on to discuss how his family's every step is monitored by a posse of newshounds and paparazzi. He also tells of the influence of his parents, growing up as a shy youngster in the family home and how their subsequent split affected him. The book was written with the assistance of Tom Watt.

Title: David Beckham: My Side