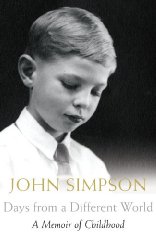 Days from a Different World: A Memoir of Childhood [Illustrated]

Near fine condition.Macmillan,2005.First edition-first printing(1 3 5 7 9 8 6 4 2).White hardback(gilt lettering to the spine,small nicks on the cover) with Dj(small nick and crease on the edges of the Dj cover),both in near fine condition.Illustrated with b/w photos.Nice and clean pages as new with a small ink mark on the outer edges,two pencil marks impressions and pen mark on the edge of the front endpaper,small nick on the edge of the pages.Nice and clean book except for the pen mark on the edge of the front endpaper.421pp.price clipped.First edition. Product Description: This is not a mere exercise in nostalgia, rather it is a journey through the England of the late 1940s and 1950s in all its shabby wonder and it will also tell the somewhat strange and often deeply painful story of John Simpsons family. It begins with Simpson at the deathbed of his aunt, the last of his close relatives to die. As she lay there, half-demented, he found himself talking to her about his childhood - his father, his grandmother, the small and rather depressing south London suburb which his family had built and dominated, and finally declined with. He talked to her about the people who were dead, and the lives which were just starting. Candid, beautifully written and touching, Like an Evening Gone will enchant all those who read it.

Title: Days from a Different World: A Memoir of Childhood [Illustrated]

Keywords: Biographies & Memoirs Days from a Different World: A Memoir of Childhood [Illustrated],

Days from a Different World: A Memoir of Childhood [Illustrated]