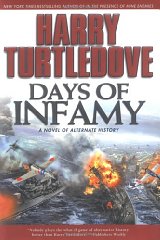 Days of Infamy: A Novel of Alternate History

Near fine condition.New American Library,2004.First edition-first printing(10 9 8 7 6 5 4 3 2 1).Red hardback with black borders(silver lettering to the spine) with Dj(two small nicks,creases and scratch on the edges of the Dj cover),both in near fine condition.Nice and clean pages as new with a small mark and light shelf wear on the outer edges,two pencil marks impressions on the edge of the first blank page of the book,light shelf wear on the back of the Dj cover.Nice and clean book with light shelf wear.440pp.Price un-clipped.First edition.

From Publishers Weekly: Alternate-history master Turtledove (Ruled Britannia) presents a starkly realistic view of what might have been had the Japanese followed the bombing of Pearl Harbor with a land invasion and occupied Hawaii. U.S. airman Fletch Armitage, held in a POW camp under horrifying conditions (the Japanese never signed the Geneva Convention), keeps hope alive even as he slowly starves. His ex-wife, Jane, keeps her head down in occupied Wahiawa, tending her assigned garden plot and hoping she won't be raped. Fisherman Jiro Takahashi, a native Japanese, welcomes the Rising Sun in Hawaii, but his sons, who consider themselves American, aren't so sure, even though the white Americans begin treating Japanese-Americans with contempt, particularly those who act as translators for the invaders, further widening the racial divide and increasing tensions. As the Japanese strengthen their hold on the islands, each side comes to grudgingly accept the courage of the other, despite the cultural chasms that separate them. The Americans vow to retake the islands, setting the scene for a final showdown that pits mastermind Commander Genda and maneuverable Zero airplanes against American strategy that includes technology the Japanese lack: radar. A less than neatly wrapped-up ending leaves room for a sequel. With an emphasis on tactics and warfare technology, this exciting, well-researched alternate history will please history buffs and SF fans alike.

Title: Days of Infamy: A Novel of Alternate History

Keywords: Days of Infamy: A Novel of Alternate History,

Days of Infamy: A Novel of Alternate History