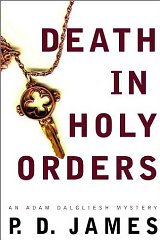 Fine condition.Alfred A. Knopf,2001.First American edition-first printing.This is a Bonzoi Book.Purple hardback with black borders(gilt lettering to the spine) with Dj(a couple of creases,nicks and scratch on the Dj cover),both in fine condition.Nice and clean pages as new with two small ink marks on the outer edges,small nick and crease on the edges of the pages,the pages are rough cut on the outer edges.Nice and clean book as new with light shelf wear on the Dj cover.418pp including Author's note.Price un-clipped.First edition.

From Publishers Weekly: Baroness James may have turned 80, but neither she nor her dogged Scotland Yard detective Commander Adam Dalgliesh (last seen in 1997's A Certain Justice) shows any sign of flagging in this superb whodunit, with its extraordinarily complex and nuanced plot and large cast of credible characters. When the body of a young ordinand, Ronald Treeves, turns up buried in a sandy bank on the Suffolk coast near isolated St. Anselm's, a High Anglican theological college, it's unclear whether his death was an accident, suicide or murder. The mystery deepens a few days later when someone suffocates Margaret Munroe, a retired nurse with a bad heart, because she remembers an event 12 years earlier that could have some bearing on whatever's amiss at St. Anselm's. Enter Dalgliesh at the behest of Ronald's father, Sir Alred, who's received an anonymous note suggesting foul play in his son's death. It isn't long before another death occurs, and this time it's clearly murder: late one night in the chapel, somebody bashes in the head of Archdeacon Crampton, a hard-nosed outsider who wanted to close St. Anselm's. Dalgliesh and his investigative team examine the complicated motives of a host of suspects resident at the college, mostly ordinands and priests, slowly unveiling the connections among the various deaths. Illegitimacy, incest, a secret marriage, a missing cloak and a valuable altar triptych are just some of the ingredients in a case as contrived as any Golden Age classic but presented with such masterful ease and conviction that even the most skeptical readers will suspend disbelief.