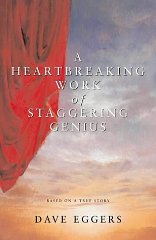 A Heartbreaking Work of Staggering Genius

Fine condition.Picador,2000.First UK edition-10th printing.Pictorial hardback(small scratch on the back cover) with Dj(a couple of creases,scratches,nick and light shelf wear on the Dj cover),both in fine condition.The book is new with light shelf wear,small pencil mark impression on the edge of the title pages,small nicks on the edge of the pages.406pp including Incomplete guide to symbols and metaphors,preface to this edition.Heavy book.

Review: Dave Eggers is a terrifically talented writer; don't hold his cleverness against him. What to make of a book called A Heartbreaking Work of Staggering Genius: Based on a True Story? For starters, there's a good bit of staggering genius before you even get to the true story, including a preface, a list of Rules and Suggestions for Enjoyment of This Book, and a 20-page acknowledgements section complete with special mail-in offer, flow chart of the book's themes, and a lovely pen-and-ink drawing of a stapler (helpfully labeled Here is a drawing of a stapler:). n nBut on to the true story. At the age of 22, Eggers became both an orphan and a single mother when his parents died within five months of one another of unrelated cancers. In the ensuing sibling division of labor, Dave is appointed unofficial guardian of his 8-year-old brother, Christopher. The two live together in semi-squalor, decaying food and sports equipment scattered about, while Eggers worries obsessively about child-welfare authorities, molesting babysitters, and his own health. His child-rearing strategy swings between making his brother's upbringing manically fun and performing bizarre developmental experiments on him. (Case in point: his idea of suitable bedtime reading is John Hersey's Hiroshima.) n nThe book is also, perhaps less successfully, about being young and hip and out to conquer the world (in an ironic, media-savvy, Gen-X way, naturally). In the early '90s, Eggers was one of the founders of the very funny Might Magazine, and he spends a fair amount of time here on Might, the hipster culture of San Francisco's South Park, and his own efforts to get on to MTV's Real World. This sort of thing doesn't age very well--but then, Eggers knows that. There's no criticism you can come up with that he hasn't put into A.H.W.O.S.G. already. The book thereafter is kind of uneven, he tells us regarding the contents after page 109, and while that's true, it's still uneven in a way that is funny and heartfelt and interesting. n nAll this self-consciousness could have become unbearably arch. It's a testament to Eggers's skill as a writer--and to the heartbreaking particulars of his story--that it doesn't. Currently the editor of the footnote-and-marginalia-intensive journal McSweeney's (the last issue featured an entire story by David Foster Wallace printed tinily on its spine), Eggers comes from the most media-saturated generation in history--so much so that he can't feel an emotion without the sense that it's already been felt for him. What may seem like postmodern noodling is really just Eggers writing about pain in the only honest way available to him. Oddly enough, the effect is one of complete sincerity, and--especially in its concluding pages--this memoir as metafiction is affecting beyond all rational explanation.

A Heartbreaking Work of Staggering Genius