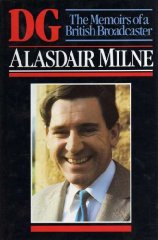 Dg: The Memoirs of a British Broadcaster

VGC.Hodder & Stoughton,1988.First edition.Black hardback(gilt lettering to the spine,dent/nick on the edge of the back cover) with Dj(two small nicks and creases on the edges of the Dj cover),both in VGC.Illustrated with b/w photos.Nice and clean pages but slightly tainted and yellow on the outer edges,small foxing mark on the outer edge of the pages.The book is in VGC but with some shelf wear on the back of the Dj cover.237pp including Postscript:Do we need the BBC?,index.Price un-clipped.A collectable first edition.

Product Description: This is an account of Alisdair Milne's years as Director General of the BBC when he had to deal with the aftermath of the Falklands War, the miners' strike, press accusations, a hostile government, the Real Lives fracas, the Panorama libel action and the Secret Society case. Meanwhile the BBC was under scrutiny from the Peacock Committee, license fee negotiations and satellite broadcasting. It also covers the history of the BBC since the 1950s when the BBC wilted under pressure from ITV and then recovered.

Title: Dg: The Memoirs of a British Broadcaster

Keywords: Biographies & Memoirs Dg: The Memoirs of a British Broadcaster,

Dg: The Memoirs of a British Broadcaster