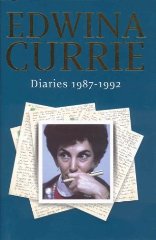 Product Description: In the late 1980s, when she began keeping a diary, Edwina Currie was the second most prominent woman in British politics - after Margaret Thatcher. Indeed, she was often spoken of as a potential prime minister. Her outspokenness and her lively, media-friendly personality won her a much higher profile than her status as a junior minister would otherwise have commanded. When she was forced to resign from the Government after warning of the danger signs of salmonella infection in eggs, she was already a national figure. The appearance of these diaries is a significant publishing event. Like Alan Clark's diaries, they provide an insight into politics at the top, by a writer with an observant eye and a sharp sense of humour.