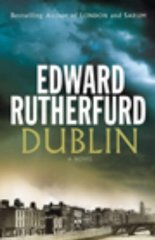 Product Description: Rutherfurd's epic style, famously exercised in his dramatic accounts of Sarum, Russia and London, makes this saga, set against the backdrop of the great events of Irish history, so readable and moving. With the help of some of the country's leading historians, Rutherfurd has unearthed many curious gems that overturn our traditionally perceived notions of Ireland's past: - There were significant numbers of English people in early Ireland - they were actually slaves to the Irish Patrick was not a name the Irish ever used until modern times. For centuries, the saint's name was held in such reverence that the Irish would only call themselves Gilpatrick, which means 'servant of Patrick'. It was the one and only English Pope who first told the English King to conquer Christian Ireland in the Middle Ages. St Stephen's Green is the well-known centre of fashionable Dublin and is named after a small leper hospital that used to be there; Leopardstown racecourse is so-called because the land it is on also belonged to a leper hospital. The people in Ireland who most hated the Reformation were actually the English in Ireland, who were the strictest Catholics at that time.