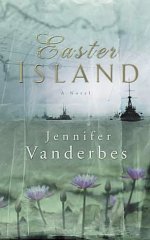 From Publishers Weekly: Restrained passion and conflicted loyalties drive this sweeping debut novel, in which two women of different eras experience the mysteries of Easter Island. In 1912, Elsa Pendleton's father dies and leaves her to care for her 19-year-old sister, Alice, who is beautiful but not quite right in the head. To secure their position, 22-year-old Elsa marries Edward Beazley, a contemporary of her father's who is an anthropologist with the Royal Geographical Society in England. They travel to Easter Island, where Edward plans to study the giant moai sculptures, and Elsa finds herself immersed in a new and harsh culture. As she contends with revelations concerning her husband and her sister, she befriends the native islanders and becomes engrossed in unlocking the meaning of the symbols she finds on wooden tablets. In a parallel narrative, Greer Farraday, a young American botanist recovering from a disastrous marriage to an older professor, arrives on the island in 1973 to uncover the mystery of the island's lack of native trees. One of Greer's fellow island researchers is Vicente Portales, a cryptographer attempting to interpret the rongorongo tablets and breech Greer's defenses. As Elsa and Greer's stories play out in alternating sections, a third element is intertwined: the tale of Graf Von Spee, the German admiral who led his ill-fated fleet across the South Pacific at the outbreak of World War I. Vanderbes knows how to craft suspense, and the narratives-while packed with vivid historical and scientific detail-move forward on the strength of her fully realized characters. When the connection between Elsa and Greer is revealed, it illuminates the novel.