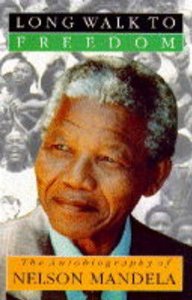 A Long Walk to Freedom: The Autobiography of Nelson Mandela

Fine/VGC.Little,Brown & Co,1994.First UK edition-7th printing(10 9 8 7).Black hardback(gilt lettering to the spine) in fine condition, with Dj(two small tears,a couple of creases and small nicks on the edges of the Dj cover) in VGC .Illustrated with b/w map of South Africa inside the front and back cover,b/w photos.Nice and clean pages as new with a couple of ink marks on the outer edges, small pencil mark impression on the edge of the first page of the book,small mark on the edge of the last page of the book.Nice and clean book with light shelf wear on the Dj cover.630pp including index.Price un-clipped.Heavy book (approx 1.5 Kg).

Product Description: Since his release from prison in 1990, Nelson Mandela has emerged as the world's most potent moral leader since Gandhi. As president of the ANC and head of the anti-apartheid movement, he has been instrumental in moving South Africa toward black-majority rule. Throughout the world he is revered as a vital force in the fight for human rights and racial equality. In this autobiography Nelson Mandela details the development of his political consciousess and describes his pivotal role in the formation of the ANC Youth League. He brings to life his dramatic years underground, which lead to a sentence of life imprisonment in 1964, and sheds new light on his surprisingly eventful quarter century behind bars. And he takes us inside the momentous events of the 1990s, leading up to South Africa's first-ever multi-racial elections, and his feelings about his near landslide victory as president.

Title: A Long Walk to Freedom: The Autobiography of Nelson Mandela

A Long Walk to Freedom: The Autobiography of Nelson Mandela