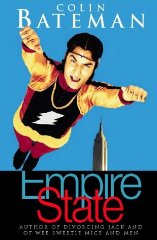 VGC.HarperCollins,1997.First UK edition-first printing(1 3 5 7 9 8 6 4 2).Blue hardback(gilt lettering to the spine,two nicks on the cover) with Dj(some creases and nicks on the Dj cover),both in VGC.Nice and clean pages but slightly tainted and yellow on the outer edges,small nick and crease on the edges of the pages.The book with is in VGC with light shelf wear on the edges of the pages(slightly yellow).512pp.First edition.

Review: A darkly funny novel from the author of Divorcing Jack. Northern Irish Nathan Jones thinks his luck is turning when he lands a job as a security guard in New York, despite his lack of a Green Card. He hopes his new job will persuade his girlfriend Lisa to stop working in a strip joint. But things do not go as planned and hapless Nathan is swept along on a tide of bizarre events. His desperate romance and a fascination with Sid Vicous lead to an unwanted S&M experience, which forces him to go on the run. Nathan is, however, not the book's only fugitive. We also follow the trajectory of racist Southerner, George Burley, as he tries to realize his dream of assassinating the most powerful man in America. As the plot races along Nathan's unpredictable temper gets him deeper and deeper into trouble, culminating in a hostage situation with the President of the United States of America on top of the Empire State Building. Romance, murder and mayhem are all rolled together in this entertaining black comedy.