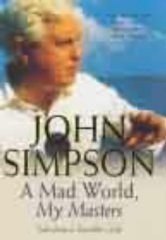 A Mad World, My Masters : Tales from a Traveller's Life

Near fine condition.Macmillan,2000.First edition-first printing(1 3 5 7 9 8 6 4 2).Blue hardback(gilt lettering to the spine,small nick and scratch on the cover) with Dj(a couple of creases,nick and scratch on the Dj cover),both in near fine condition.Illustrated with b/w photos.Nice and clean pages as new but with an inscription on the edge of the first blank page of the book,small ink mark and nick on the outer edges of the pages. Nice and clean book as new except for the written inscription.450pp including list of illustrations and index.Price un-clipped.A collectable First edition-first printing.Heavy book.

Review: Some people just aren't cut out for the suburbs. As one of the BBC's top foreign correspondents, John Simpson has been at the epicentre of many of the world's flashpoints for more than 30 years. Afghanistan, Belgrade, Hong Kong, Baghdad; you name it, he's been there. And what's more, he hasn't just met the great and the good, such as Clinton and Blair, he's met the top bogey men, too. He's had Osama Bin Laden pleading with some Afghani guerrillas to kill him and his crew, he's interviewed Emperor Bokassa, Colonel Gadhafi and Arkan and had close up dealings with Saddam Hussein. And it goes without saying he was one of the first people in the entire world to see in the new millennium on the specially named Millennium Island, which the Kiribati government claimed just squeezed inside the international date line. n nSmall wonder, then, that Simpson is a source of dozens of good stories. Many of these have been written up elsewhere in his autobiographical Strange Places, Questionable People, but there are plenty left over for this latest book in which Simpson eschews chronology and just sticks to some plain old-fashioned story telling, with sections on villains, spies, icons etc. Unsurprisingly, Simpson has a journalistic eye for detail and nuance and never holds back from telling you the things you want to know; so when he went to interview Bokassa, he managed to sneak a look inside his giant deep freeze to see if there were any human body parts. It sounds trivial but it isn't; in a strange sort of way the examination of the contents of a deep freeze can be every bit as revealing as an hour on a shrink's couch. n nSimpson is a genial companion, not much given to introspection, and the book races seamlessly from anecdote to anecdote. And yet underpinning the narrative is Simpson's global malaise, a feeling that everywhere in the world is becoming more and more similar and that it's increasingly hard to find anywhere genuinely wild and remote. Simpson has been to many of those places, but the way he describes them makes them seem fairly similar in their own kind of way. McDonalds and the Gap may be thin on the ground, but there are bullets and danger aplenty. To have been to so many of these places is an achievement in itself; to have returned unscathed is a minor miracle; John Simpson has led a charmed life in more ways than one. --John Crace n nReview nThis is the second volume of autobiography from Simpson who, from 1966, has been one of the BBC's main news journalists. It follows honourably in the tradition of the earlier, very successful Strange Places, Questionable People. In this new book Simpson continues his account of experiences and encounters in some of the wilder reaches of the planet and, despite having no overall theme as Simpson declares at the start, but merely ideas and stories as they came to me, this is a very satisfying book. Among the many experiences he recalls are Colonel Gadhaffi farting his way through an interview, visiting the KGB's private museum, watching a thief's hand being cut off, being bombed, as well as falling under the spell of Princess Diana. As one might expect from such a source, Simpson's prose is exemplary. Like his first book, he manages to communicate successfully the humour - as well as tragedy - behind news stories, large and small. A mad world, indeed, if this was not on a few Christmas lists this year. n nThe BBC's world affairs editor tells us what it's like in some of the hot spots and hell holes of the world in this second volume of autobiography. His eventful career to date includes being hunted by the agents of Osama bin Laden, the Saudi Islamic fundamentalist and financier of international terrorism; having to undergo a painful tendon operation in a Belgrade hospital during a NATO air raid; and sheltering from being sprayed with sewage by the Chilean police. He interviews Colonel Gaddafi and the late Serbian warlord Arkan and undertakes horrific journeys to get interviews with Columbian drug dealers or Mujahideen guerillas.

Title: A Mad World, My Masters : Tales from a Traveller's Life

Keywords: Biographies & Memoirs A Mad World, My Masters : Tales from a Traveller's Life,

A Mad World, My Masters : Tales from a Traveller's Life